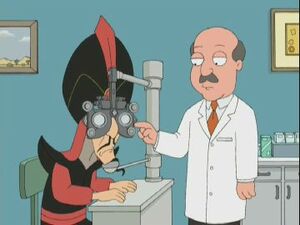 Jafar is a fictional character featured as the primary antagonist in the Disney film Aladdin and its sequel, The Return of Jafar. He is an evil sorcerer and the former Grand Vizier of the Sultan of Agrabah. He does not appear in Aladdin and the King of Thieves since he is permanently defeated in the sequel, but he is mentioned by the Genie. Jafar has a pet parrot named Iago in the first film; the bird normally perches on Jafar's shoulders or his staff.

In "Lois Kills Stewie", Stewie Griffin outlaws Disney from making direct-to-DVD movies such as Aladdin IV: Jafar May Need Glasses. Jafar is at the eye doctor, and is trying to go through each pair of glasses he may need, and compares the two kinds of glasses the doctor gives him, seeing which one works out best for him.

In "Foreign Affairs", the family watches Aladdin V: Jafar answers the Census as Jafar has a difficult time answering the examiners questions and balks at first when asked his sexual orientation before settling on "Not Sure".

Retrieved from "https://familyguy.fandom.com/wiki/Jafar?oldid=215257"
Community content is available under CC-BY-SA unless otherwise noted.