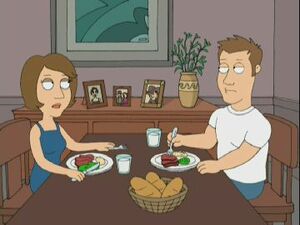 Jacob Benjamin "Jake" Gyllenhaal (born December 19, 1980) is an American actor. The son of director Stephen Gyllenhaal and screenwriter Naomi Foner, Gyllenhaal began acting at age ten. He has appeared in diverse roles since his first lead role in 1999's October Sky, followed by the 2001 indie cult hit Donnie Darko, in which he played a psychologically troubled teen and onscreen brother to his real-life sister, actress Maggie Gyllenhaal. In the 2004 blockbuster The Day After Tomorrow he portrayed a student caught in a cataclysmic global cooling event, alongside Dennis Quaid as his father. He then played against type as a frustrated Marine in Jarhead (2005). The same year, he won critical acclaim as Jack Twist in the film Brokeback Mountain opposite Heath Ledger.

He appears with sister Maggie in "Movin' Out (Brian's Song)" to debate who is the worst actor in the family. Their father Stephen ends the debate, declaring they're both dismal actors.

Jake is voiced by Seth Green.

In "Carter and Tricia", Jake is compared with actor Jared Leto in a television show titled Gyllenhaal or Leto?, with the contestants drawing a complete blank at separating the two when faced with their worst accomplishments.

Retrieved from "https://familyguy.fandom.com/wiki/Jake_Gyllenhaal?oldid=197836"
Community content is available under CC-BY-SA unless otherwise noted.