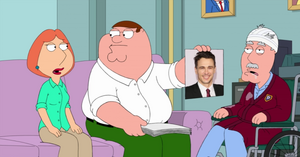 James Edward Franco (born April 19, 1978) is an American actor, filmmaker, and college instructor, known for his work in Sam Raimi's Spider-Man trilogy (2002–2007), Pineapple Express, Eat, Pray, Love, Rise of the Planet of the Apes (2011) and Oz the Great and Powerful.

Peter tries to use images of James and Dave Franco while playing the game Celebrity with Carter Pewterschmidt in "Regarding Carter", having been stumped by them while playing against Joe Swanson previously.

Peter pretends to be James Franco when he gets trapped on the stairs after becoming exhausted in "Family Guy Lite" by enrolling in a couple of college classes in order to have sex with girls not old enough to get into bars.

Retrieved from "https://familyguy.fandom.com/wiki/James_Franco?oldid=210950"
Community content is available under CC-BY-SA unless otherwise noted.