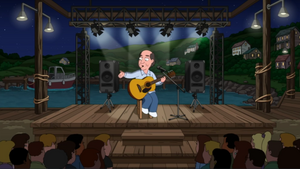 James Vernon Taylor (born March 12, 1948) is an American singer-songwriter and guitarist. James has won five Grammy awards and is a member of the Rock and Roll Hall of Fame.

After Stewie launches a cutaway about being the only one in the house that understands social media in "Guy, Robot", Lois is shown posing various pictures to Facebook to draw some attention without luck. She posts a video of James Taylor's "Fire and Rain" and "Likes" her own post, hoping that it will get something started.

In "Baby Stewie", Stewie insists that genetic modification will change the world, like when James Taylor changed rock and roll. A cutaway gag shows him preparing to sing a song that is really just directions to Boston. Writer Artie Johann provides the voice of Taylor.

Retrieved from "https://familyguy.fandom.com/wiki/James_Taylor?oldid=223259"
Community content is available under CC-BY-SA unless otherwise noted.