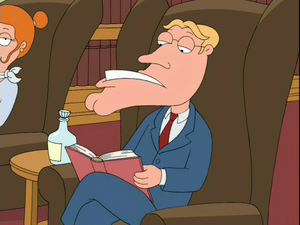 James William Bottomtooth III was Brian 's co-worker at The New Yorker in "Brian Goes Back to College". He suffers from a severe underbite, which has given him a comically oversized lower jaw and has made his speech impossible to understand due to his extreme Locust Valley Lockjaw accent. He has a taste for brandy, which he pours into his lower jaw.

He is part of the staff of The New Yorker in "Brian Goes Back to College".

In "You May Now Kiss the...Uh...Guy Who Receives", he refuses to sign Brian's petition against Mayor Adam West's gay marriage ban because he's a devout Christian. He sings an awkward version of "Amazing Grace" at the piano afterwards.

He has a son, James William Bottomtooth IV, who attends Morningwood Academy. The son bears a strong resemblance to his father, particularly the large bottom jaw and speech. Like his classmates, he holds a strong antipathy for Chris Griffin, as seen in "No Chris Left Behind", until he finds out that Chris is the grandson of Carter Pewterschmidt, who also attended Morningwood.

He is part of the mob that rushes the Griffin home in "The Juice Is Loose".

He is voiced by Chris Sheridan.

Retrieved from "https://familyguy.fandom.com/wiki/James_William_Bottomtooth_III?oldid=225779"
Community content is available under CC-BY-SA unless otherwise noted.