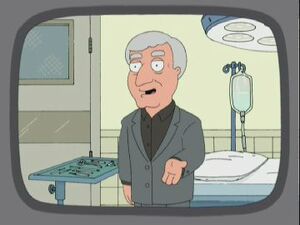 Stewie Griffin appears as Klinger from M*A*S*H in "Fifteen Minutes of Shame".

He provides his own voice in the how-to video for Joe Swanson's leg transplant operation that also doubles as anesthesia in "Believe It or Not, Joe's Walking on Air".

Retrieved from "https://familyguy.fandom.com/wiki/Jamie_Farr?oldid=129339"
Community content is available under CC-BY-SA unless otherwise noted.