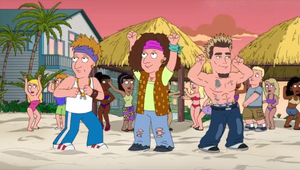 James Harvey Kennedy (born May 25, 1970) is an American stand-up comedian, television producer, screenwriter, and actor, known for his work in the Scream franchise and The Jamie Kennedy Experiment.

Peter accuses Herbert of being Jamie Kennedy in "German Guy" after Herbert says Franz Gutentag is a Nazi, promptly revealing he has The Jamie Kennedy Experiment confused with Punk'd.

While staying at the MTV Beach House courtesy of Carter Pewterschmidt as part of his plot to break up Peter and Lois in "Peter & Lois' Wedding", Peter meets his heroes Mark McGrath, Pauly Shore, Jamie Kennedy. he tries to invite them to his wedding, but they inform him they have to stay in the 1990s.

Retrieved from "https://familyguy.fandom.com/wiki/Jamie_Kennedy?oldid=216645"
Community content is available under CC-BY-SA unless otherwise noted.