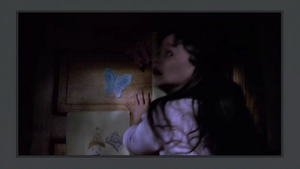 Jamie Lloyd is a fictional character, played by Danielle Harris, from the Halloween series of slasher films.

Joyce Kinney reveals that Tom Tucker once worked in films, performing as Michael Myers in the Halloween series in "Tom Tucker: The Man and His Dream". Peter is surprised to discover this fact, as Halloween 4: The Return of Michael Myers is one of his favorite films. He plays a clip from a DVD for Brian where they recognize Tom attempting to grab Jamie.

Retrieved from "https://familyguy.fandom.com/wiki/Jamie_Lloyd?oldid=210788"
Community content is available under CC-BY-SA unless otherwise noted.