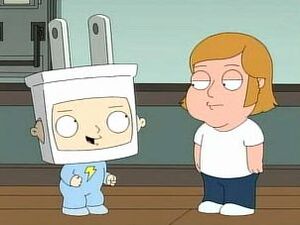 Jared is a kindergartener who is an alumnus of Little Clam Pre-School. He comes back to see the school's annual production of Terri Schiavo: The Musical in "Peter-assment". Although the pre-schoolers look up to him, they can't help but wonder why he hangs around them. Stewie Griffin is thrilled to meet Jared as he inherited the role of the plug that Jared held for three years.

He is voiced by Seth Green who based the character on Matthew McConaughey as David Wooderson from the film Dazed and Confused.

Retrieved from "https://familyguy.fandom.com/wiki/Jared?oldid=201105"
Community content is available under CC-BY-SA unless otherwise noted.