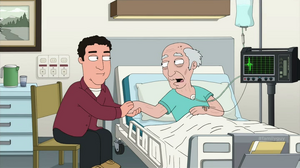 Jason Matthew Biggs (born May 12, 1978) is an American actor, known for his work in the American Pie series, the 2012 Teenage Mutant Ninja Turtles TV series and Orange Is the New Black.

The pie baking contest in "Absolutely Babulous" notes that Jason Biggs is not welcome, referring to the star's character had sex with an apple pie in American Pie.

Jason is voiced by Seth Green.

Retrieved from "https://familyguy.fandom.com/wiki/Jason_Biggs?oldid=215494"
Community content is available under CC-BY-SA unless otherwise noted.