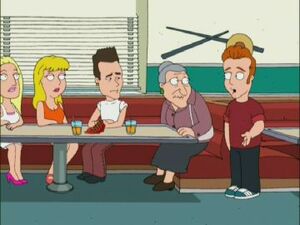 Jason Bradford Priestley is a Canadian-American actor and film director. He is best known as the virtuous Brandon Walsh on the television series Beverly Hills, 90210, a role which catapulted him to recognition in the early 1990s.

In Stewie Griffin: The Untold Story, Jennie Garth, Priestley, Luke Perry, and Tori Spelling, and Shannen Doherty appear in a cutaway that parodies his portrayal of Walsh, who was a teenager when Priestley, then in her mid-20s, began portraying him.

Retrieved from "https://familyguy.fandom.com/wiki/Jason_Priestley?oldid=172256"
Community content is available under CC-BY-SA unless otherwise noted.