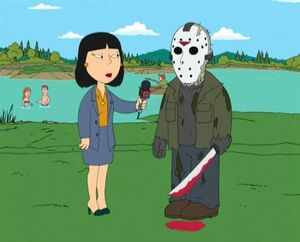 Jason Voorhees is a fictional character from the Friday the 13th series of slasher films. He first appeared in 1980s Friday the 13th, in which he was portrayed by Ari Lehman. The character has subsequently been represented in various other media, including novels, comic books, and a cross-over film with another iconic horror film character, Freddy Krueger.

He appears in "It Takes a Village Idiot, and I Married One", where he is interviewed by Quahog 5 News reporter Tricia Takanawa, who asks how he feels about the lake being clean again. He calmly responds that the wildlife will be coming back and it will revitalize the tourism in the lake, to which he takes good pride as Jason kills two teen girls during the interview with his trademark machete. He appears later as the manager of the store Britches and Hose, where he threatens to kill an employee if she screws up her job as the cashier.

In the DVD version of "We Love You, Conrad", Jason reads scripture while killing two flower girls at the Russell-Wilcox wedding.

When a dead kid is discovered at Camp Fresh Start in "Killer Queen", everyone looks at Jason who says he is just there to drop off his son, Justin Voorhees. Justin tries to stab Jason but he points out that it doesn't work on him.

Jason buys a cabin overlooking a summer camp from Brian in "Brian the Closer". When Brian tries to explain about the cabin being the site of previous murders, Jason assures him he already made the sale.

He is voiced by Jackson Douglas, the husband of Alex Borstein.