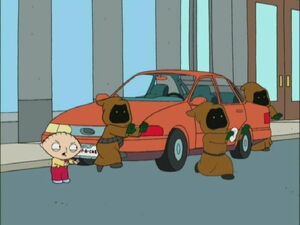 Jawas were typically short rodent-like natives of Tatooine in the Star Wars franchise. They were passionate scavengers, seeking out technology for sale or trade in the deep deserts in their huge sandcrawler transports. A band of Jawas was responsible for locating C-3PO and R2-D2 and selling them to Luke Skywalker's uncle Owen Lars in A New Hope. They had a reputation for swindling, as they had a penchant for selling old equipment such as outdated faulty droids to moisture farmers.

In the second Stewie Griffin: The Untold Story segment "Bango Was His Name Oh", Stewie Griffin shoos them away from the car he was using to track down a man he believes is his father.

In Blue Harvest, Mort Goldman plays one of the Jawas and they contribute the same way they did in A New Hope.

Retrieved from "https://familyguy.fandom.com/wiki/Jawa?oldid=131140"
Community content is available under CC-BY-SA unless otherwise noted.