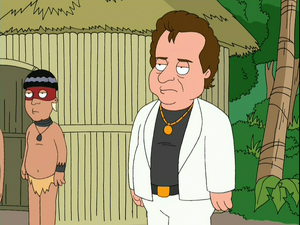 Jay Mohr (born August 23, 1970) is an American actor and stand up comedian. He is perhaps best known for his role as Professor Rick Payne in the TV series Ghost Whisperer, in which he starred for two years. He is also known for playing the title role in the CBS sitcom Gary Unmarried, which ran from 2008 to 2010.

On Family Guy, he voiced Joe Pesci's character Vincent Gambini in "Jungle Love" and Wilshard Watkins, the producer of The Real Live Griffins, in "Fifteen Minutes of Shame". He also voiced an unnamed character in "He's Too Sexy for His Fat".

Retrieved from "https://familyguy.fandom.com/wiki/Jay_Mohr?oldid=125028"
Community content is available under CC-BY-SA unless otherwise noted.