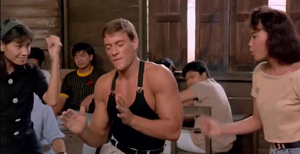 A scene from the film Kickboxer is used in "Big Trouble in Little Quahog" when Stewie expresses his contentment at extracting revenge on Brian. A second clip from the same film is played at the end when Stewie cheers himself up after drowning a group of water bears he and Brian befriended.

Retrieved from "https://familyguy.fandom.com/wiki/Jean-Claude_Van_Damme?oldid=207751"
Community content is available under CC-BY-SA unless otherwise noted.