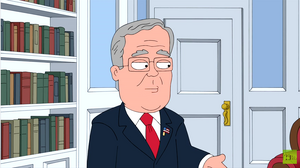 Stewie mentions Jeb in "The Courtship of Stewie's Father" when he notes while in Florida that somewhere, Jeb is eating a live puppy.

Stewie and Brian team up to set up a cutaway gag in which Consuela is married to Jeb Bush in "Road to India", emphatically comparing her to his wife Columba Bush.

Jeb is voiced by Dan Nainan.

Retrieved from "https://familyguy.fandom.com/wiki/Jeb_Bush?oldid=189353"
Community content is available under CC-BY-SA unless otherwise noted.