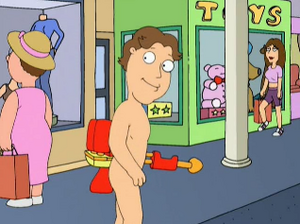 Jeff Campbell is the eldest son in Quahog, Rhode Island's family of nudists. His parents are Dave and Dotty Campbell who also have another unnamed toddler child. He is an athletic boy, but he gets picked on by the children of the local tailors. He dated Meg Griffin soon after meeting her and her parents. Meg went against her parents' wishes by dating him as they were biased against his nudism. It is implied that he is "well endowed". He appeared in "From Method to Madness" and was voiced by Chris Cox.

Also appears in "PTV", during the musical number "The FCC Song".