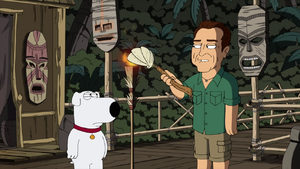 Jeffrey Lee Probst (born November 4, 1961) is an American game show host and an executive producer, known as the host of the U.S. version of the reality television show Survivor and was also the host of The Jeff Probst Show.

Upon arrival at James Woods' house in "And Then There Were Fewer", Lois says "I bet Jeff Probst has a house like this".

Jeff provides his own voice in "Petey IV" as Brian's departure from the Griffin home in "The D in Apartment 23" is recapped as a Survivor-style episode.

Retrieved from "https://familyguy.fandom.com/wiki/Jeff_Probst?oldid=200478"
Community content is available under CC-BY-SA unless otherwise noted.