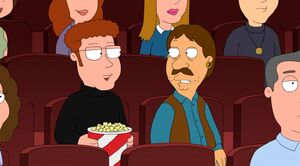 Jeffrey is Bruce's boyfriend and later spouse, and is voiced by Mike Henry, just as his partner is.

In "Lois Kills Stewie", Bruce calls out to Jeffrey when the police interview him in their pursuit of Stewie Griffin for attempting to murder Lois Griffin.

When Bruce spots Peter Griffin with a mustache in "McStroke", Jeffrey is the first person he calls. Both are surprised by the news.

In "Road to the North Pole", Bruce comes out of the closet and outs Jeffrey by declaring that he wants a wedding ring from him for Christmas in the song "All I Really Want For Christmas".

In "Extra Large Medium", the two were venturing in the woods when Bruce hears who turn out to be Stewie and Chris Griffin, declared missing at the time, screaming. When Bruce does discover them, he tells Jeffrey that he did indeed find them.

An unnamed character believed to be Jeffrey was finally seen in the uncensored cut of "Friends of Peter G" in the Quahog Cinema before Peter goes on a drunken rampage. Bruce asks he has time to go to the bathroom and takes offense when Jeffery asks if he has his stub in his pocket.

Jeffrey joins in the treasure hunt in "Finders Keepers" and attends Peter's roast in "Roasted Guy".

Peter tries to get Jeffrey and Bruce to join their protest against Mayor Adam West's raising the drinking age to fifty in "Underage Peter".

During "Married...With Cancer", Bruce officiates Brian's wedding and remarks that it's another wedding he has to watch. He makes his intentions of marriage known to Jeffrey who looks away.

The pair are on the outs in "Meg's Wedding", with Bruce proposing to Meg. But when she admits she's aware that Bruce is gay, she's the catalyst for them actually getting married.

Retrieved from "https://familyguy.fandom.com/wiki/Jeffrey?oldid=228205"
Community content is available under CC-BY-SA unless otherwise noted.