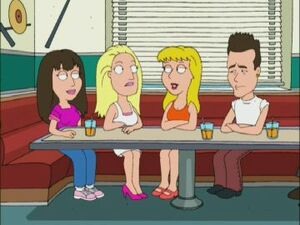 Jennifer Eve Garth is an American actress, best known for starring in the prominent role of Kelly Taylor throughout the Beverly Hills, 90210 franchise. She is also known for starring as Valerie Tyler in What I Like About You with Amanda Bynes.

In Stewie Griffin: The Untold Story, Garth, Jason Priestley, Luke Perry, and Tori Spelling parody their teenage characters despite their own advanced age.

Retrieved from "https://familyguy.fandom.com/wiki/Jennie_Garth?oldid=189215"
Community content is available under CC-BY-SA unless otherwise noted.