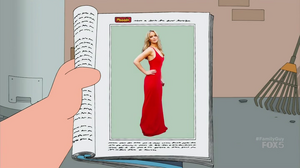 A live-action image of Lawrence appears in "Underage Peter" as Peter and the guys hold up a copy of People magazine. As they continue to drink, the image changes to continuously hotter women, before becoming Neil Patrick Harris.

Jennifer is included in Chris' list of celebrities who have led successful lives despite exposing themselves in "An App a Day".

Retrieved from "https://familyguy.fandom.com/wiki/Jennifer_Lawrence?oldid=218862"
Community content is available under CC-BY-SA unless otherwise noted.