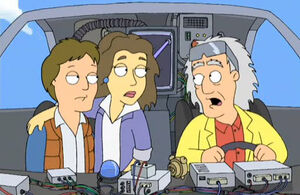 Jennifer Jane Parker is a fictional character in the Back to the Future motion picture trilogy. The character has been played by two actresses in the movies and voiced by a third in the spin-off series. Jennifer is always a secondary character in the stories, the girlfriend of the protagonist Marty McFly. She was played by Claudia Wells in the first film, and Elisabeth Shue in the sequels.

In "The Courtship of Stewie's Father", Stewie Griffin sets up a cutaway parodying the end of the first film with Dr. Emmett Brown telling Marty and Jennifer that they have to come to the future to fix their kids' situation. However, Doc goes further, telling them their daughter marries a black man. This news does little to offend Marty, and in turn Jennifer, as they agree that they're OK with it, although Doc's racist attitude alienates them.

Retrieved from "https://familyguy.fandom.com/wiki/Jennifer_Parker?oldid=94342"
Community content is available under CC-BY-SA unless otherwise noted.