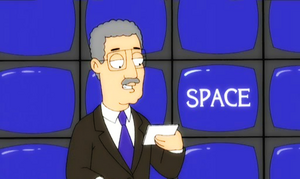 Jeopardy! is an American quiz show featuring trivia in history, literature, the arts, pop culture, science, sports, geography, and more. There are also wordplay categories. The show has a unique answer-and-question format in which contestants are presented with clues in the form of answers, and must phrase their responses in question form.

The show has a decades-long broadcast history in the United States since its creation by Merv Griffin in 1964. It first ran in the daytime on NBC from March 30, 1964 until January 3, 1975; concurrently ran in a weekly syndicated version from September 9, 1974 to September 5, 1975; and later ran in a revival from October 2, 1978 to March 2, 1979. All of these versions were hosted by Art Fleming. Its current incarnation is the Alex Trebek-hosted syndicated version, which has aired continuously since September 10, 1984, and has been adapted internationally.

In "Brian: Portrait of a Dog", Peter Griffin was a contestant on the show, and buzzed in with an answer of "What is diarrhea?".

When Peter and Chris pass a collection of television monitors in "If I'm Dyin', I'm Lyin'", Jeopardy! is airing on ABC.

In "I Take Thee Quagmire", Mayor Adam West had been a contestant on the show, answering a question in the Space category Kebert Xela, which sent Trebek to the fifth dimension. This idea is a parody of the imp-like villain Mister Mxyzptlk from DC Comics' Superman, who is also returned to the Fifth Dimension by saying his name backwards. A year after this episode aired, a real-life Jeopardy! contestant actually did put down "Kebert Xela" as an answer in Final Jeopardy!, having gone into the round with just $1, losing by a wide margin. [1]

Lois notes that Peter tends to say the wrong things at times in "Livin' on a Prayer". In a cutaway gag, Peter is shown getting the answer wrong on Jeopardy and cursing.

Peter and the guys watch a special edition of "Jeopardy!: The Best of Contestant Banter" at The Drunken Clam in "Turban Cowboy".

Peter muffs an answer when he asks about his penis size in "Trump Guy".

Retrieved from "https://familyguy.fandom.com/wiki/Jeopardy!?oldid=209935"
Community content is available under CC-BY-SA unless otherwise noted.