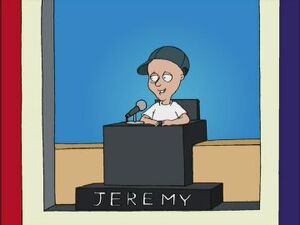 Jeremy is a terminally ill boy who appears infrequently on Family Guy.

His wish to be a celebrity square on Hollywood Squares was granted by the Grant-A-Dream Foundation in "If I'm Dyin', I'm Lyin'".

He was at the Boston Red Sox game in "Mr. Griffin Goes to Washington". He was about to catch a home run ball when Peter Griffin snatched it away.

Starting in "Mr. Saturday Knight", the site of the Happy-Go-Lucky Toy Factory is turned into a center to provide care for the terminally ill. It is unknown if Jeremy became a resident.

In "Stuck Together, Torn Apart", he picked out new kidneys at CostMart with his mother.

In It's A Trap!, he appears in Emperor Palpatine's, played by Carter Pewterschmidt, honor guard. In another wish, he gets to tour the Death Star

Retrieved from "https://familyguy.fandom.com/wiki/Jeremy_the_Terminally_ill_Boy?oldid=112251"
Community content is available under CC-BY-SA unless otherwise noted.