Jerome was Cleveland Brown's temporary replacement in "Jerome Is the New Black" and is the current owner of The Drunken Clam.

He was involved with Lois Pewterschmidt, now married to Peter Griffin, in an intimate relationship over 20 years before the episode took place. Peter accidentally burned down Jerome's house, so Lois invited him to come live with them. Peter believed that Jerome was trying to steal Lois from him and became jealous. He kicked Jerome out of his house, but later apologized to him, and they remained friends. Jerome also tells Peter that he had some nasty ass sex with Meg when he was staying with the Griffins although Peter told him that he doesn't care about that.

He returns in "Save the Clam" playing for Mort Goldman's softball team against Peter and his team. He accidentally kills Horace after a ball Jerome hits strikes him in the face. He appears at the funeral, where he states he apologizes for killing Horace. He later takes over owning Horace's bar The Drunken Clam with his sports earnings from lacrosse, which also happens to be his brother's name.

Jerome hears about the treasure chase in "Finders Keepers", but only asks for his Treasure to bring him a "grape wine." "Baby Got Black" would reveals that despite this, Jerome is a single father.

The uncensored version of "Life of Brian" adds a scene of Jerome bringing the guys beer at the Drunken Clam as Vinny questions them as to allowing him to handle their drinks.

After Peter becomes the star of an anti-smoking campaign in "Secondhand Spoke", Jerome mounts his picture in The Drunken Clam along with black celebrities.

Jerome has strong reservations when his daughter Pam starts to date Chris Griffin in "Baby Got Black". When he finds his own racism reflected in Peter's advice to Chris, he relents on letting them see each other. Jerome's age is revealed to be 42.

Jerome trade beer for one of Peter's comic strips in "The Simpsons Guy". He also admonished Quagmire for his language in the bar in "Brian the Closer" while his mother is present.

Jerrome attempts to "upgrade" the bar food in "Pilling Them Softly".

He appears dressed as Tricia Takanawa in "A Lot Going On Upstairs" when Brian tries to fool Stewie by dressing the family and neighbors as each other.

In "Follow the Money", Jerome reveals that he lost both his childhood sweetheart and their daughter shortly after their wedding. 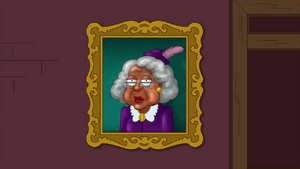 Jerome faces having to close the Drunken Clam for up to a month after his mother suffers a stroke in "The Woof of Wall Street" and needs to travel to Long Island to be with her. Peter and the guys volunteer to run the place while he's away, but a bull that Peter brings into the bar wrecks the place and destroys Jerome's only image of his mother, a painting that he keeps. When she passes away, the guys try to construct dummies of themselves for Jerome to beat up on his return, but Peter ends up inside the bar while his dummy is safe outside.

Retrieved from "https://familyguy.fandom.com/wiki/Jerome?oldid=220099"
Community content is available under CC-BY-SA unless otherwise noted.