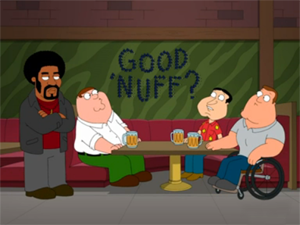 Jerome proves he is good 'nuff to be in the group

Jerome Is the New Black
Peter and the guys look for a friend to fill the vacancy left by Cleveland. 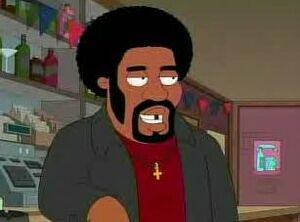 Upset that Cleveland left the group of friends to move to Stoolbend, Virginia, Peter, Quagmire and Joe decide to interview potential friends to fill the vacancy, and are approached by a fellow bar patron named Jerome. After impressing the group with his dart skills, they decide to let Jerome join as their new fourth member. Later, when Peter introduces Jerome to Lois, she reveals that they used to date. Peter grows jealous and, in a fit of rage, throws a bottle through the window of Jerome's home, inadvertently causing a fire and burning down the house. The next morning, Peter discovers that Lois has invited Jerome to live with them. As time goes on, Peter cannot contain his jealousy and eventually kicks Jerome out. Lois soon reveals that Jerome had bought Peter a gift, and Peter goes and apologizes to Jerome. In the end, Jerome accepts the apology, then tells Peter he had sex with Meg, but Peter doesn't care. 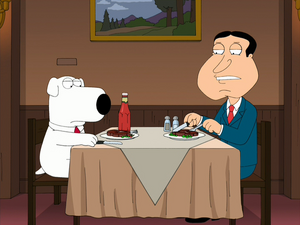 Meanwhile, Brian discovers that Quagmire hates him. After attempting to rectify the situation outside Quagmire's house, Brian ends up making things worse by mistaking Quagmire's sister for one of his dates and tricking Quagmire into thinking Cheryl Tiegs is inviting Quagmire to dinner. At dinner, Brian tries to make small talk, but Quagmire doesn't soften up. Finally, Brian asks Quagmire why he hates him. Quagmire then goes into a long rant listing the many reasons he hates Brian, then storms off, leaving Brian alone and speechless.

In the end, Brian returns home having been crying. Stewie cheers him up saying that he only needs to like himself, professes his own admiration for Brian, and lets him spend the night in his room. Once they start to sleep, however, Brian farts, much to Stewie's chagrin.

Previous Episode /// Jerome Is the New Black \\\ Next Episode

Retrieved from "https://familyguy.fandom.com/wiki/Jerome_Is_the_New_Black?oldid=216452"
Community content is available under CC-BY-SA unless otherwise noted.