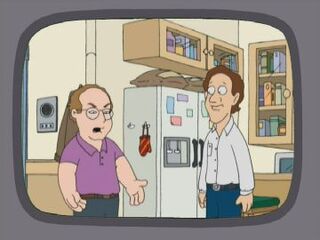 Jerome "Jerry" Seinfeld (born April 29, 1954) is an American stand-up comedian, actor and writer, best known for playing a semi-fictional version of himself in the situation comedy Seinfeld (1989–1998), which he co-created and co-wrote with Larry David, and, in the show's final two seasons, co-executive-produced.

He first appears in "Death Has a Shadow" as a jester Peter hired to entertain Lois.

He makes an appearance in "Road to Europe" with Andy Dick and Andy Rooney on the same airplane flight as Brian and Stewie Griffin.

He also makes an appearance on Seinfeld with Jason Alexander in "When You Wish Upon a Weinstein", where they go into a bit about a woman being a tickler, and Jerry not being a "stlicka for a tickla". After this, both continue to say "stickler" and "tickler" continuously. Brian, while watching this part of the show, screams out for the remote.

In "Bookie of the Year", Lois points out to Chris that Seinfeld drank Snapple in its heyday, referring to him as the "king of the 90s."

When Joe reminds Peter of the time he blew them off to hang out with Jerry Seinfeld in "Foxx in the Men House", he is shown trying to make small talk during a car ride with Jerry. He notes that Julia Louis-Dreyfus now has several Emmys. When that fails to get a significant response, he asks about Jerry's wife stealing a cookbook.

Quagmire pronounces Jerry Seinfeld's name as 'Steinfeld' in "Bri-Da". He also thinks his catchphrase is an exaggerated 'Par-don me!', a nod to Steve Martin's "Well, excuse me!" [1]

Retrieved from "https://familyguy.fandom.com/wiki/Jerry_Seinfeld?oldid=215326"
Community content is available under CC-BY-SA unless otherwise noted.