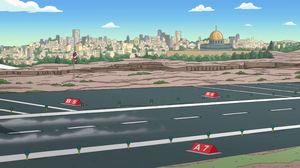 Jerusalem is located on a plateau in the Judean Mountains between the Mediterranean and the Dead Sea, is one of the oldest cities in the world. It is considered holy to the three major Abrahamic religions of Judaism, Christianity and Islam. Despite an attempt by Israel to establish the entire city as its capital, the international community rejected the annexation as illegal and treats East Jerusalem as Palestinian territory occupied by Israel.

Peter and the guys travel to Jerusalem in search of God to confront him over the continual losses by the New England Patriots in "3 Acts of God", only to discover everyone there looks and acts like Mort Goldman.

Retrieved from "https://familyguy.fandom.com/wiki/Jerusalem?oldid=160479"
Community content is available under CC-BY-SA unless otherwise noted.