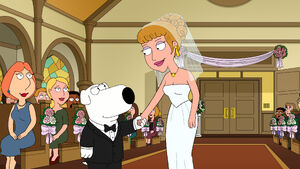 Jess Schlotz is a woman that Brian meets in a bar in "Married...With Cancer".

When they find out they have similar tastes, she reveals that she has terminal cancer but that doesn't stop them from going back to her place for sex where they have a great time and Brian agrees to help her with her bucket list.

As they become even closer, Brian introduces her to the family over dinner and their humor irritates him until they leave. After going to Pizza Palace, her prognoses takes a turn for the worse and Brian asks her to marry him and she agrees. Just as they complete their marriage vows, Jess' doctor arrives and reveals that her cancer is cured. Jess celebrates by eating lots of food and gaining weight now that she can finally keep it down. She also develops severe flatulence from her digestive system working again.

With his dreams of a short-lived commitment spiraling down the drain, Brian and Jess move back into his old apartment with her mother Helen and her cats. Jess continues to gorge herself to make up for all the food she couldn't eat before until she ends up choking on nachos at Taco Zone and collapsing. But just as Brian thinks he's finally free of her, she recovers.

Desperate to escape his bad marriage in "Dead Dog Walking", Brian considers burning down his apartment and faking his death. Peter tries to help him look at some positive aspects of being married but he starts gaining lots of weight until he dislocates his hip. Jess suddenly finds herself on the caregiving end until she can no longer cope and drops Brian off at the pound to be euthanized. Peter discovers this and saves Brian, and they meet Jess in the lobby. She reveals she is upset because he allowed her to almost die previously from choking and they both believe that they may be truly meant for each other since they both wished each other dead. With their love rekindled, they decide to give it another chance.

Following the final commercial break in the episode, Jess is revealed to have died. When the family starts to squabble over revealed secrets, Brian takes a moment to dump Jess' ashes outside in the bushes.

Jess is voiced by Casey Wilson.

Retrieved from "https://familyguy.fandom.com/wiki/Jess_Schlotz?oldid=213012"
Community content is available under CC-BY-SA unless otherwise noted.