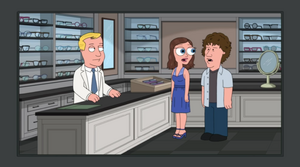 Jesse Adam Eisenberg (born October 5, 1983) is an American actor, author, and playwright, known for his work in Superman v Batman: Dawn of Justice as well as the Justice League series, Zombieland and its sequel Zombieland: Double Tap and Rio and its sequels.

Jesse co-stars with Emma Stone in Opposite Eye Sizes in "Start Me Up".

In an effort to prove that Brian is an idiot in "Movin' Out (Brian's Song)", Stewie demands that Brian explain the difference between Michael Cera and Jesse Eisenberg. However, Brian's lawyer objects to the question, claiming it's impossible and it is upheld by the judge, who issues a warning to Stewie.