Jillian Wilcox, (born Jillian Russell), is an intellectually-challenged young woman of whom Brian dated. She is portrayed as a stereotypical blonde woman; being low in intelligence, but making up for it with her attractiveness. She is one of the few characters to have full conversations with Stewie.

Jillian's lack of intelligence is demonstrated in many ways. In "Whistle While Your Wife Works", it is revealed she believes Hitler is still alive, the capital of Rhode Island is Rhode Island City, and that lemons are killed to make lemonade. In "We Love You, Conrad", she believed a box of Junior Mints was an iPod. It was also implied that Jillian has bulimia in "Whistle While Your Wife Works", evidenced when she remarked upon the fact that she threw up a lot in high school and no longer experiences her menstrual period. The issue is addressed again in "Prick Up Your Ears" when Brian and Stewie heard her vomiting in the bathroom, and Brian tells Stewie that Jillian has an eating disorder. Although he appears to feel sorry for her, he reluctantly admits that her induced purging makes her body look "fantastic." 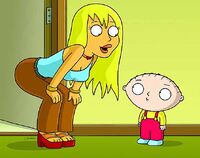 In "Whistle While Your Wife Works", Stewie, outraged that Brian wants to date such an airhead, tries to convince him to break up with her, but Brian ends up having sex with her instead. Their relationship appears to have only a few meaningful qualities and seems to revolve solely around sex. According to Brian, she drives a Jetta and is extremely sexy.

In "Boys Do Cry", she notified her boyfriend that Quahog gave up on their pursuit of Stewie. She also had to be reassured of her Christianity, because she asked Brian how she would know if she's Jewish.

In "Movin' Out (Brian's Song)", she and Peter become good friends after Brian ditches Jillian to have some time by himself. It is during this time with Peter, that she decided her and Brian should move in together. Brian agrees, and finds it going great until he discovers he is unable to pay their rent. Stewie shows up at Brian's door with wad of cash, offering to pay their rent if Brian lets Stewie stay with him and Jillian for a while. It is revealed to Jillian by Stewie that he was paying their rent while she and Brian were having sex. After Brian tells Jillian he didn't really want to move in at first she tearfully runs away. Brian later confronts Jillian and confesses his love only to find out she's dating Adam West living with him at her old apartment, breaking up their relationship.

In "Play It Again, Brian", she is mentioned when Peter remarks about Brian's inability to hold down a relationship after learning he tried having sex with Lois. He also says she is dumber than actor Lou Ferrigno.

She is seen in the mob in "The Juice Is Loose".

In "We Love You, Conrad", she invites the Griffins, and B. Ryan, but not Brian, to her wedding to Derek Wilcox. She asks Peter to make a speech for her, and ends up being the DJ and the one who walks her down the aisle. This is because both of her parents are dead, her mom dying of cancer. She allows Brian and Stewie to meet Derek over dinner at Qu'Est-ce que pue Restaurant, and get to know him. Brian is angered by how impressive Derek is. At the advice of Lauren Conrad, Brian crashes their wedding to object to her marriage and proclaim his love for her, but Jillian lets him down softly and goes ahead with marrying Derek. The newlyweds are then seen having sex at the reception.

She is later mentioned in "Jerome Is the New Black".

Jillian appears in the new HD opening sequence as one of the chorus girls, which debuted in "Excellence in Broadcasting" in its initial airing.

She appears with her husband Derek Wilcox in "And Then There Were Fewer", much to Brian's surprise. She thought James Woods was a shark because of his CBS series. Unfortunately, Derek was murdered by Diane Simmons, thus making Jillian a widow. Diane innocently consoles her after Derek's death. The extended DVD version reveals Jillian to be pregnant.

In "Road to the North Pole", she partakes in the musical number "All I Really Want For Christmas". Believing it is Easter, she asks for colorful Easter eggs.

Peter gives her a shoutout on The Price is Right in "New Kidney in Town".

In "Tiegs for Two", Lois mentioned Jillian as she thought that she was the girl for Brian, but he said he could never win her back. Quagmire then went on a date with Jillian, but only to cause Brian pain for dating his love, Cheryl Tiegs. When Brian and Quagmire start arguing during a dinner date, Jillian and Cheryl both leave them, with Jillian happy to note that Quagmire made her look away from him during sex.

In "Valentine's Day in Quahog", Stewie gathers scores of Brian’s former girlfriends to get to the bottom of why he’s unsuccessful in love.

In "Life of Brian", Jillian attends Brian's funeral. In "Follow the Money", she works as the barista at Coffee Hut.

Retrieved from "https://familyguy.fandom.com/wiki/Jillian_Russell-Wilcox?oldid=199621"
Community content is available under CC-BY-SA unless otherwise noted.