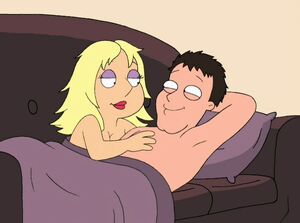 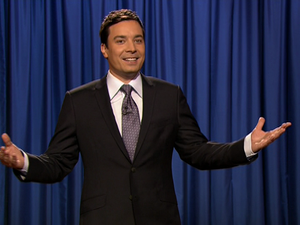 James Thomas "Jimmy" Fallon, Jr. (born September 19, 1974) is an American stand up comedian, television host and actor. He was noted for cracking up in the middle of sketches on Saturday Night Live, on which he starred from 1998-2004. In 2014, Fallon became host of The Tonight Show.

In "Don't Make Me Over", he hosted Saturday Night Live for the first time since his departure. Meg and the Griffins were the musical guest that night. For the opening sketch, he has sex with Meg. When Peter heard about this, he beat him up, not for having sex with Meg, but for laughing while doing sketches.

Fallon had been the host of Late Night. In "We Love You, Conrad", he made a live-action appearance on the set of the show doing a snappy monologue about Lauren Conrad's relationship with Brian Griffin.

When the guys strike out at making a viral video in "Stewie Is Enceinte", Peter wishes they had just gotten Jimmy Fallon to do something lame.

Fallon is seen on a poorly volume-controlled in-cab video in "HTTPete".

Retrieved from "https://familyguy.fandom.com/wiki/Jimmy_Fallon?oldid=211763"
Community content is available under CC-BY-SA unless otherwise noted.