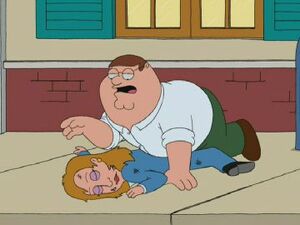 Joan Mary Cusack (born October 11, 1962) is an American film, stage and television actress. A well-respected comedic character actor, she has twice been nominated for the Academy Award for Best Supporting Actress for her roles in the movies Working Girl (with Woody Allen) and In & Out and is a three-time winner of the American Comedy Award as "Funniest Supporting Actress in a Motion Picture". Cusack was a cast member of the sketch comedy TV show Saturday Night Live from 1985-86. She is the sister of actor John Cusack.

She appeared in "Blind Ambition". Frustrated that no one will remember him for anything, Peter Griffin climbs to the roof of The Drunken Clam to declare he will do something amazing. He suddenly slips and lands on the actress, killing her instantly. Peter then stuffs Cusack into a mailbox and slowly walks away from the scene. Cleveland Brown used this exact situation in a hypothetical only minutes earlier.

Retrieved from "https://familyguy.fandom.com/wiki/Joan_Cusack?oldid=137114"
Community content is available under CC-BY-SA unless otherwise noted.