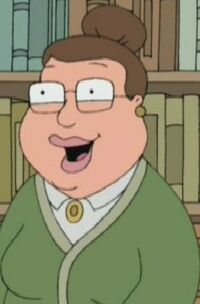 Joanna is a recurring character, who first appears in "Petergeist" and then later on in "Movin' Out (Brian's Song)". She works in a library and is invited to a surprise party Stewie organized for Brian. She is known to have a very annoying way of laughing and usually laughs at her own jokes. However, she gets along well with Stewie, who took an instant liking to her upon their first encounter.

In "Cat Fight", Joanna eats at The Barista-Cats with Bruce and jokes that if she has nine lives, she'd have an easier time finding a man.

In "Short Cuts", she shops at Goldman's Pharmacy. Her employment is also confirmed to be the Quahog Public Library. She is seen again as the librarian that mistakenly gives Peter Van Halen's CD of 1984 instead of George Orwell's book of the same name in "Coma Guy".

Joanna is voiced by Alex Borstein.

Retrieved from "https://familyguy.fandom.com/wiki/Joanna?oldid=222580"
Community content is available under CC-BY-SA unless otherwise noted.