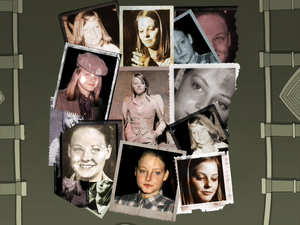 In "Model Misbehavior", Foster is at a dock with John Hinckley, Jr., her stalker, when she realizes she was wrong about men.

She was also mentioned in "Sibling Rivalry" when the gym teacher wants the applicator shaped like Foster's knuckles.

She was also seen in "Peter's Daughter", when Peter called her a "bad man". She is seen in bed with a woman whose husband has just come home. In a manly voice, Foster assures her not to worry, then farts.

In the Universe Without Christianity, Hinckley has placed her image on the ceiling of the Sistine Chapel in "Road to the Multiverse".

King Herod, played by Carter Pewterschmidt, pledges to kill the new messiah in "Jesus, Mary & Joseph", noting that then Jodie Foster would love him.

Retrieved from "https://familyguy.fandom.com/wiki/Jodie_Foster?oldid=140699"
Community content is available under CC-BY-SA unless otherwise noted.