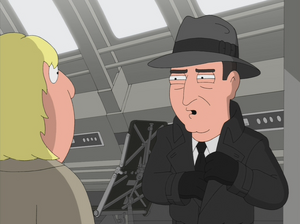 Joe Flaherty (born June 21, 1941) is an American-Canadian actor and comedian. He is best known for his work on the Canadian sketch comedy SCTV, from 1976 to 1984, and as Harold Weir on Freaks and Geeks. He is currently a judge on The Second City's Next Comedy Legend.

Joe parodied the role again as the Vatican courier in "The Big Bang Theory" that brings Brian news that Stewie froze himself and is buried in the basement after staying in the Renaissance to inject his DNA into Leonardo da Vinci's girlfriend in order for Stewie to exist.

Retrieved from "https://familyguy.fandom.com/wiki/Joe_Flaherty?oldid=101684"
Community content is available under CC-BY-SA unless otherwise noted.