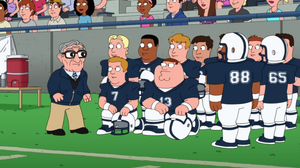 Joseph Vincent Paterno (December 21, 1926 – January 22, 2012) was an American college football player, athletic director, and coach. He was the head coach of the Penn State Nittany Lions from 1966 to 2011. His career ended with his dismissal from the team on November 9, 2011, as a result of a Penn State child sex abuse scandal.[1]

After giving Meg a pep talk in "Christmas is Coming", Peter credits his skill to learning from Penn State coach Joe Paterno who is shown encouraging his players to remember everything learned during practice and to forget everything that happened after practice.

Retrieved from "https://familyguy.fandom.com/wiki/Joe_Paterno?oldid=217480"
Community content is available under CC-BY-SA unless otherwise noted.