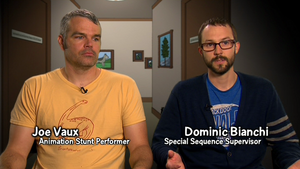 Joe Vaux has been a Storyboard / Revisionist, director and assistant director with the following episode credits:

Joe also appears as an artist sleep at the drawing table in a live-action sequence in "Quagmire and Meg".

Retrieved from "https://familyguy.fandom.com/wiki/Joe_Vaux?oldid=219880"
Community content is available under CC-BY-SA unless otherwise noted.