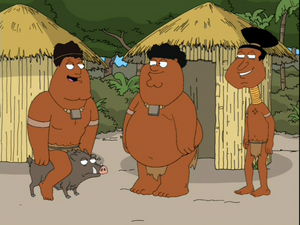 Joemama is Joe Swanson's African ancestor, who appeared in "Untitled Griffin Family History". He, like his descendant, is paraplegic, paralyzed from the waist down. In lieu of a wheelchair, he used a wild boar as his method of mobility. His best friends were Nate Griffin and Quagdingo. The three were captured by Cleveland from South Carolina, and brought to the American British colonies, along with Tobi, Ali Williams, and the African ancestors of Tom Tucker and Diane Simmons. It is unknown what became of Joemama following the arrival in the new world. The status of the wild boar is unknown as well.

Retrieved from "https://familyguy.fandom.com/wiki/Joemama?oldid=215073"
Community content is available under CC-BY-SA unless otherwise noted.