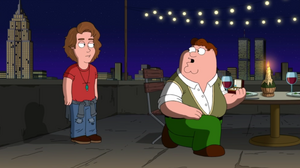 Princess Leia (Lois) points out to Obi-Wan Kenobi (Herbert) that he owes them a favor after they covered up an indiscretion involving Joey Lawrence haircuts in "Blue Harvest".

When met with indifference from Joey in "Peter & Lois' Wedding", Peter points out that Blossom took time away from acting and still became a success while Joey continued to work and really hadn't achieved anything accept going bald, which prompts a satisfactory reaction from him.

Retrieved from "https://familyguy.fandom.com/wiki/Joey_Lawrence?oldid=216532"
Community content is available under CC-BY-SA unless otherwise noted.