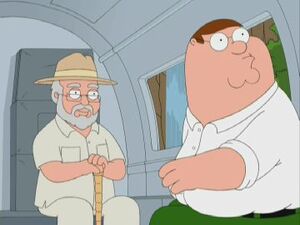 John Hammond is the owner of Jurassic Park and founder of InGen. He is portrayed by Richard Attenborough in the films. In the films, he appears as a sort of sympathetic grandfather who means well but underestimates the power of genetics, but in the book he is depicted as a cold, eccentric CEO solely interested in profit and dinosaurs.

In "Tales of a Third Grade Nothing", he transports Peter Griffin to Executive Bathroom Island.

Retrieved from "https://familyguy.fandom.com/wiki/John_Hammond?oldid=184862"
Community content is available under CC-BY-SA unless otherwise noted.