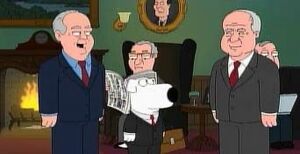 John Sidney McCain III (August 29, 1936-August 25, 2018) was the senior United States Senator from Arizona. He was the Republican nominee for President in the 2008 United States election, losing to Barack Obama. McCain was a prisoner of war from 1967 to 1973 when he was captured by Vietnamese soldiers after his plane was shot down over Hanoi.

"The John McCain Experience" was a small attraction Peter Griffin experienced in "Padre de Familia". It starts off with the person being locked in a cage, then being continuously poked by a Vietnamese person, until they claim that they want to be President of the United States.

In "Road to Germany", Stewie Griffin finds a McCain/Palin campaign button in his Adolf Hitler disguise.

In "Brian & Stewie", it is revealed that Brian voted for McCain.

John McCain appeared in "Excellence in Broadcasting" at the Republican National Headquarters. As a parody of Scooby-Doo, it is revealed he and Rush Limbaugh solve mysteries together with the help of Hot Dog. In one, Democrat Congressman Barney Frank is the monster behind the mask.

McCain's imprisonment and torture at the hands of the Viet Cong is referenced in "Let His Son Die" in ""Family Guy" Through the Years".

Retrieved from "https://familyguy.fandom.com/wiki/John_McCain?oldid=210255"
Community content is available under CC-BY-SA unless otherwise noted.