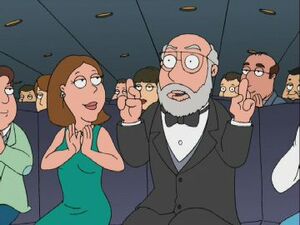 John Towner Williams (born February 8, 1932) is a prolific American composer, conductor, and pianist. In a career spanning six decades, he has composed many of the most recognizable film scores in the history of motion pictures, including those for Jaws, the Star Wars saga, Superman, the Indiana Jones films, E.T. the Extra-Terrestrial, Hook, Jurassic Park, Schindler's List, Home Alone, and three Harry Potter films. He has composed the music for all but two of director Steven Spielberg's feature films.

Other notable works by Williams include theme music for four Olympic Games, the NBC Nightly News, the rededication of the Statue of Liberty, the DreamWorks Pictures production logo, and the television series Lost in Space.

He appears in "Brian Does Hollywood" at the Woodies for Best Soundtrack.

In Blue Harvest, he appears on Tatooine with his orchestra. They are killed with Owen and Beru Lars by stormtroopers and replaced with Danny Elfman and his orchestra.

He appears in It's A Trap!, leading an orchestra on bicycles during the speederbike chase. He conducts them in a performance of the Entertainment Tonight theme.

He is voiced by Bruce McGill.

Retrieved from "https://familyguy.fandom.com/wiki/John_Williams?oldid=148752"
Community content is available under CC-BY-SA unless otherwise noted.