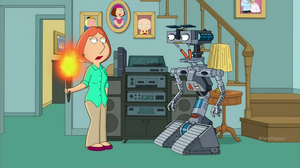 In "Brian the Closer", Peter becomes a Johnny 5 version of himself.

After going on a shopping spree in "Undergrounded", Lois reveals that Peter bought a T-shirt with Johnny 5 on it when he claimed to have been working. He retorts which he is actually wearing was for her Mother's Day gift.

Retrieved from "https://familyguy.fandom.com/wiki/Johnny_5?oldid=219514"
Community content is available under CC-BY-SA unless otherwise noted.