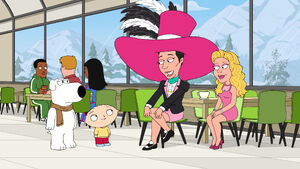 John Garvin Weir (born July 2, 1984) is an American figure skater, fashion designer, and television commentator. He is a two-time Olympian, becoming the 2008 World bronze medalist and a three-time U.S. national champion from 2004–2006. He is also known for his sports commentary with Tara Lipinski, as well as his work in LGBTQ activism.

Weir appears as himself with his partner Tara in "Griffin Winter Games". Stewie tries to strike up a friendship with Tara but finds that Johnny's effeminate act is really a ruse for him to score with her and threatens Stewie. Chris tries to intercede and gets beat up.

Retrieved from "https://familyguy.fandom.com/wiki/Johnny_Weir?oldid=208544"
Community content is available under CC-BY-SA unless otherwise noted.