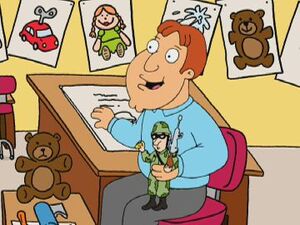 Johnson was an employee at the Happy-Go-Lucky Toy Factory, and a colleague of Peter Griffin.

He created the G.I. Jew toy in "Death Has a Shadow", carried over from the Pilot Pitch. Johnson also attended the Happy-Go-Lucky Picnic in "The Thin White Line". He took part in the "Catch the Greased-up Deaf Guy" game. In the Tranquilizer Dart Game, Johnson and Griffin were the last two remaining players.

He could not attend, thus pitch in the factory's annual baseball game in "A Hero Sits Next Door", because his wife was in labor, but he still attends Joe Swanson's party after the game.

He sits behind Peter at the playing of their boss Jonathan Weed's video will in "Mr. Saturday Knight". Since the demolition of the factory that occurred immediately following the reading at Weed's request, Johnson parted company with Peter.

In "Peter's Got Woods", Johnson is sitting in the row in front of Brian and Shauna Parks at the cinema.

Johnson is voiced by Seth MacFarlane.

Retrieved from "https://familyguy.fandom.com/wiki/Johnson?oldid=213434"
Community content is available under CC-BY-SA unless otherwise noted.