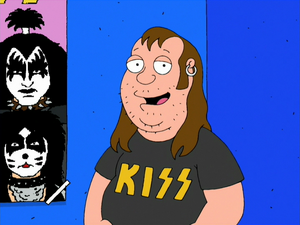 Jonathan Kolia "Jon" Favreau (born October 19, 1966) is an American actor, director, screenwriter, voice artist, and comedian. As an actor, he is best known for his roles in Swingers which he also wrote, Rudy, Very Bad Things, and The Break-Up. His notable directorial efforts include Elf, Iron Man, Iron Man 2, and Cowboys & Aliens. He also served as an executive producer on The Avengers and Iron Man 3.

Jon provides the voice of Donny Sciberra and the first bazaar salesman in "Road to Europe".

Retrieved from "https://familyguy.fandom.com/wiki/Jon_Favreau?oldid=222865"
Community content is available under CC-BY-SA unless otherwise noted.