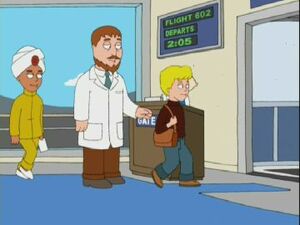 Jonny Quest, often referred to, but never titled on screen, as The Adventures of Jonny Quest, is a science fiction/adventure animated television series produced by Hanna-Barbera Productions for Screen Gems about a boy who accompanies his father on extraordinary adventures.

In a segment of Stewie Griffin: The Untold Story, Stewie Griffin is shown running an airline check in and singles out Hadji, a turban-wearing Indian, for a security inspection, forcing him to miss the flight with the others.

Retrieved from "https://familyguy.fandom.com/wiki/Jonny_Quest?oldid=175668"
Community content is available under CC-BY-SA unless otherwise noted.