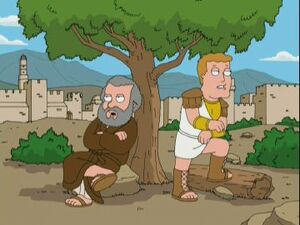 Judas Iscariot was, according to the New Testament, one of the twelve original Apostles of Jesus. Among the twelve, he was apparently designated to keep account of the "money bag" but he is most traditionally known for his role in his betrayal of Jesus to the hands of Roman authorities.

He finds a kindred spirit in Pontius Pilate to be rid of Jesus in "Believe It or Not, Joe's Walking on Air".

Stewie admits he has interfered with the past many times in "Life of Brian". A cutaway shows him planting the idea to rebel in Judas' head during the Last Supper by noting that he only had the salad while Jesus had five margaritas.

Brian plays the role of Judas in "Holly Bibble".

Retrieved from "https://familyguy.fandom.com/wiki/Judas_Iscariot?oldid=222363"
Community content is available under CC-BY-SA unless otherwise noted.