The Judge is a recurring character on Family Guy. He is given the full name of Judge Dignified Q. Blackman in "Veteran Guy".

He is most often seen presiding over many of the court cases on the show, including Peter Griffin's welfare fraud case in "Death Has a Shadow", where he was initially found guilty until Stewie Griffin used his mind control device on him. Stewie's presence as an infant led to sympathy and let Griffin go and made him give Peter's job back.

In "Screwed the Pooch", he presided over Brian's custody case for what he thought were his and Seabreeze Pewterschmidt's puppies. He ruled that Brian gets to keep his puppies, however must be neutered. 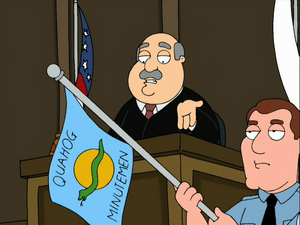 In "Brian Wallows and Peter's Swallows", he presides over Brian's DWI case, where he sentences him to community service.

On occasion, a white judge presided over some of the earliest trials, notably when Peter and the guys were accused of burning down The Drunken Clam in "One if by Clam, Two if by Sea". A second white judge appeared at Peter's trial for shooting Cleveland Brown, Jr. in "A Shot in the Dark".

In Peter's lawsuit against McBurgertown in "McStroke", the case was initially dismissed, until new evidence led to the company's guilt. It is revealed he has a subscription to Grape Soda Today, which Peter bribed him with in his first attempt to sue McBurgertown.

In "Stewie Kills Lois", Peter was found guilty of murdering his wife Lois, until she showed up at the courtroom alive.

In Peter's rape accusation and lawsuit against Dr. Elmer Hartman in "Stewie Loves Lois", Hartman was found guilty by a false flashback to Judge's own prostate exam which led him to believe Hartman raped him.

In Peter's accidental arson case in "Tales of a Third Grade Nothing", he sentenced him to a week in jail, released in time for the next newest episode. In "Petarded", he stripped Peter of custody of his kids Meg, Chris, and Stewie, deeming him an unfit parent.

In "April in Quahog", he presided over a murder case that Peter was on jury duty for. As he did not want to be on jury duty, he behaved in a way that would get him out of serving while at the trial. Judge became infuriated and went after Peter himself.

For their drunken behavior at Quahog Cinema in "Friends of Peter G", he sentences Peter and Brian to attend Alcoholics Anonymous for 30 days.

Judge presides over Mayor Adam West's murder trial in "12 and a Half Angry Men".

He presides over the court when Peter, Cleveland and Joe are accused of "stolen valor" by pretending to have been in the service in "Veteran Guy". He considers forcing them to join the marines, but allows them to join the coast guard instead. Quagmire, who was to be let go as he had actually served in the Navy, volunteers to join them.

He appears in Peter's hallucination in "Coma Guy" where he sentences Peter to "an awkward apology dinner with Joaquin Phoenix."

He is voiced by Phil LaMarr.